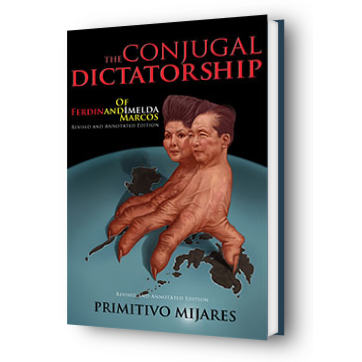 Order The Conjugal Dictatorship of Ferdinand and Imelda Marcos

The Conjugal Dictatorship of Ferdinand and Imelda Marcos provides a detailed, first-hand account of the Marcos administration during the era of Martial Law. It was written by the only person Ferdinand Marcos trusted with open access to his personal chambers: press secretary and right-hand aid Primitivo "Tibo" Mijares. Unlike other books about the era, this book was written by a true insider who took no steps to "sugar-coat" the details, even those which resulted in his self-incrimination.

The book was originally published in 1976, at the outset of Martial Law. The book, and Mijares's testimony in the United States congress, inevitably led to the death of Primitivo Mijares himself, as well as his youngest son, Boyet Mijares. In 1986, the book was republished and was one of the driving forces behind the EDSA revolution. Since then, the book has been out of print. The only commercial copy which remains is the one you can find on Amazon. While they didn't change the text at all, the formatting makes the already newspaper-like work even harder to read.

Now, a revised and updated edition of The Conjugal Dictatorship of Ferdinand and Imelda Marcos, with additional references, citations, and new content has been released. Order your copy of the book online here.